Trying to find a menu that has something for everyone is certainly a VERY difficult task… but hurrah I have found one!! La Taberna 2 (not sure where 1 is?) has a great menu; with an array of choices to suit everyone (even The Vegans I bet!) They also have great specials so be sure to check the blackboard as you go in. The wine list offers a good selection and priced well. I have been here numerous times; the latest time was last week for the Manilva Netball Club Christmas Meal. The owners are very warm and welcoming, much like the restaurant itself. There is also plenty of parking around, which is always a bonus. 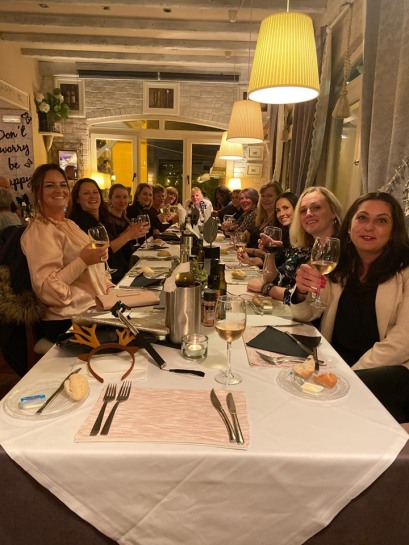 I doubt I will ever pick anything other than the Pate to start with here, it’s just my favourite! Very tasty, smooth (much like myself) ample toast & chutney and some shrubbery (for those who don’t know me- I don’t like salad) I highly recommend you try it and it’s usually on their Early Bird Menu (available 6.30-8pm, two courses for 17.95euro and a free glass of wine now I believe!)

The Penne Al’ Arrabbiata wasn’t actually a special but I really fancied it and they were kind enough to cater for a fussy eater like me. It was made with the perfect amount of kick, not drowned in sauce and some nice big chunks of chicken. The lamb in a red wine jus was off our Christmas menu last week and was very very tender. It pretty much fell off the bone. The jus was a great consistency (nothing worse than jus/gravy thicker than cement or thinner than me 😉 ) The veg selection was also good. I drank copious amounts of the Pinot Grigio Blush wine, which I can also recommend!

Usually I would have cheese, however I decided to go off piste! The apple pie and custard was really good. I had intended to share but as soon as I had a spoonful there was no chance I was letting anyone else near it! (Can you tell I am an only child?!)

So what more can I say…. if you are looking for good sized portions, homemade and tasty food…. Get yourself to La Taberna 2!

View all posts by SK